Rain clouds are gathering over Santa Ana’s main square. The cream facade of the gothic cathedral looms spookily against the dull sky. Below, a chaotic arrangement of food stall owners serve up curly fries, oblivious to the approaching storm.

I was reminded of a scene from the Adam’s Family as storm clouds rolled in behind Santa Ana’s cathedral!

Located in El Salvador’s north, Santa Ana is closer to the border with Guatemala than it is to the capital, San Salvador. Despite being the country’s second largest city, it often loses out in the tourism stakes to its smaller neighbours. The nearby towns on the Ruta de la Flores and picturesque Suchitoto to the west, drag visitors away with promises of historical walks and great cafés.

At first glance I don’t blame them. I walk through the back streets to the local supermarket, baffled at the concentration of jewellery stores and clock repair shops on my route. Just as I’m wondering how the hell these guys compete for business, the gold window displays are suddenly replaced with dark doorways.

Strong looking women wearing black eye makeup and animal print throw me an amused glance. El Salvador is a very religious country and so far, despite the mercury regularly hitting 38 degrees, I’ve tried to cover up in jeans and sleeves. On this street it seems, anything goes.

Above the doors are ladies names preceded by ‘casa’ or ‘lugar’. Cindy’s Place looks particularly drab and as an overweight man hollers pleasantly at me from an open window, I’m slightly relieved to see the supermarket. Say what you will about Santa Ana’s red light district, but its people are friendly.

Mercifully, the market has air conditioning and I shop slowly to stay cool a little longer. The staff here are even more welcoming than the prostitutes. Not even rolling an eye when I forget to weigh out my vegetables. Sharing apologetic smiles with my fellow queuers, I realise that I’m warming to Santa Ana. Its streets may not have the murals of Ataco, nor the art shops of Suchitoto but there’s something to be said for its open, hard-working people.

After dark, punters spill onto the pavement in front of Cindy’s. Men drink bottled beer in the small bar and lively music pumps out of a budget sound system. If it weren’t for my piping hot bag of pupusas I might be tempted to go in. Probably for the best that I focus on sampling the delights of the national dish in the courtyard of my hostel.

Not just any hostel, Casa Verde is Santa Ana’s jewel in the crown. Regularly voted best hostel in Central America, Carlos’s place (not to be confused with Cindy’s) has a pool, air conditioned private rooms and a kitchen that I dream of one day getting in my grown up house. Perfect for laying out my chicken, garlic and cheese pupusas.

The view of central Santa Ana from Casa Verde’s roof terrace. Oddly, most streets in the city aren’t lit after dark.

Not satisfied with simply running the region’s best hostel, Carlos also takes guests on tailor-made day trips. I sit shot-gun as he drives a small group of us upwards through the nearby mountains. We stop briefly for a glimpse of Lake Coatepeque, before continuing on an immaculate road through pines to the base of Santa Ana volcano.

El Salvador is called the land of  volcanoes for good reason. In a country almost twenty times smaller than California, there are 23 active volcanoes. The local city’s name-sake mountain is the country’s highest, and while on a good day I’m told you can see for miles, more often than not you hike into cloud. I try to stay positive as a large group of us set off behind our nimble guide.

Nimble and quick. I’m out of breath within two minutes as we track diagonally up the steep, wooded slopes. We’ve been joined by about thirty local school children who apparently don’t need breaks, so we don’t break. I mutter under my breath but appreciate the serious reason behind our leader’s tactic. There have been a spate of robberies here in recent years. Fast hiking (and an armed officer) gives the muggers less chance to catch us. Either that or they will just pick of the weakest at the back…

As we near the summit, the flora sloughs away to reveal very recent lava flows. How recent? I enquire of one of the group. 2008. Rivulets of black rock slice through oddly shaped cacti flowers and my gaze follows them back down the mountain in the direction of the lake and yet another volcano, San Marcelino. Even Coatepeque lake itself fills an ancient crater.

Never has a country’s strap-line been so apt.

The air cools as we arrive at the ridge but we are luckily cloud-free. I gingerly tread closer to the edge, not knowing what to expect. What I get is an other-worldly panorama worthy of its own Star Wars trilogy. Hundreds of meters below me, sits a garishly turquoise lake. It fills the most recently laid crater and contrasts perfectly with the reddy tones of the older, nested craters that spiral toward me.

As if nature itself has acknowledged that this simply isn’t quite good enough in the land of volcanoes, the lake also smokes. Funnels of sulphurous gas whip away from the water’s surface giving the impression of a boiling pan. By the time it hits my nostrils at the crater’s peak, the smell is dulled but its toxicity remains. For this reason, my time spent in dumb-founded silence at Santa Ana’s peak is sadly limited.

A land of volcanoes and lakes…and lakes that were once volcanoes. 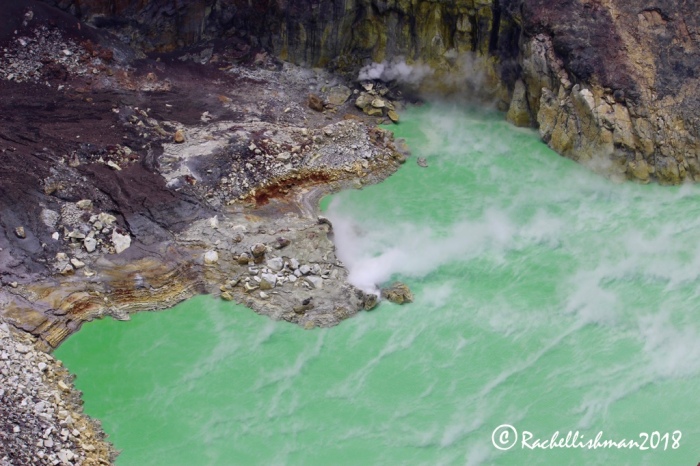 Santa Ana’s sulphurous crater lake is mesmerising, with the wisps of gas changing shape with the wind every few minutes.

Back in the city with a car full of exhilarated tourists, Carlos seems keen to prolong our cultural experience. We descend on a pavement in Barrio Nuevo and enjoy nuegados. Perfect post-hike grub, these carbohydrate-heavy dumplings are deep fried and covered in sweet sauce.

Evening is approaching and so is another storm. I drop my tired, heavy legs into the pool. I’m smug, full-bellied and not even the soaring humidity can dampen my spirits. To the casual observer, Santa Ana is associated more with pragmatism than perfection. Industry and business characterise its centre and I can understand why tourists may feel underwhelmed.

For me though, it has been another perfect day in El Salvador’s second city.

I was meant to leave today. I don’t think I will.

6 thoughts on “The Unsung Pleasures Of Santa Ana, El Salvador”