Venice’s celebrity stems from its wonders of engineering, its diversity and its rich ancient trade, but often we only think of its canals.

It was the first destination on my journey through Italy, and in the time I spent purposefully losing myself in its narrow streets, the most important thing I learnt was to look up. I quickly realised that the city’s history, and its everyday reality, often happen high above its waterways.

I walked up the Giants Staircase to reach the perfectly symmetrical senate rooms of the Doge’s Palace. Venice’s previous wealth shines from the gold leaf and renaissance art on the walls. The barked decisions on trade at the most western fringes of the spice road, which have arguably made the city what it is today, still seemed to echo around the sparsely furnished halls. In front of the wooden simplicity of the Doge’s chair, I could only imagine which global dignitaries had knelt where I now stood.

The only way is up: The Giants Staircase leads onto the first floor of the Doge’s Palace.

Tourists travel by canal under the famous bridge of Sighs – the final view of the outside world for prisoners of the Doge.

The writing’s on the wall: Latin gives clues to the building’s age, architect and inhabitants.

In the streets, I deciphered clues about each building in the ornate facades of entranceways. From grandiose churches to small houses with barely a window, every single one seemed to tell a story. In the Jewish quarter, I noted extra floors stacked atop renaissance dwellings that at one time, dealt with the expanding population. Like many other European cities, a commemorative plaque in the corner of a large piazza paid respect to its citizens who faced cruel expulsion to camps during World War II. Not the romantic Venice in magazines, but a crucial part of the city’s story.

When I struggled to find the romance in a city that’s famous for it, I searched above me for inspiration. As preoccupied couples arranged themselves neatly for selfies in their gondolas, and tourists groups pushed past me to stay with their guide, I only had to look up: lovers were casually intertwined on balconies, locals rhythmically hung out washing under their very Venetian windows and long-forgotten road signs led me to quieter, more picturesque streets.

Once a way for merchants, masked ball revellers and goods to get from A to B, in modern times Gondolas have become a revenue stream of their own. Come late afternoon, when the water traffic was relentless and Gondoliers most alert, the reflection of the colourful leaning towers in the glassy waterways made for the perfect postcard.

Nevertheless, as I focused my lens on this snapshot of the quintessential Venice, I spared a thought for all those gilded rooms, intricate archways and balconies above me, which might just hold more stories than that pretty city canal. 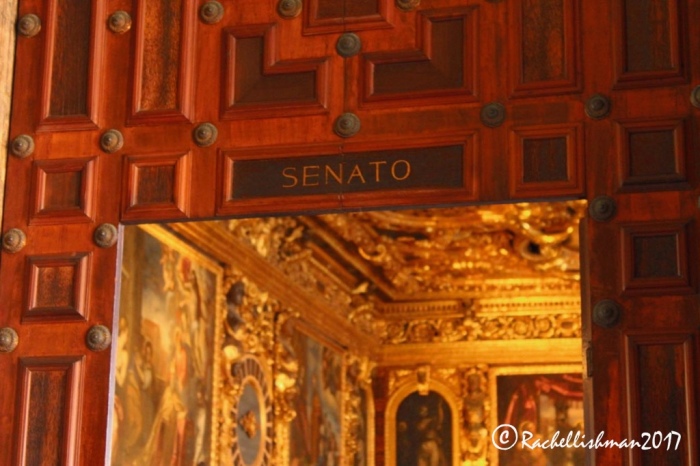 Look above entrances for clues to history: The golden ceilings within the Doge’s Palace. 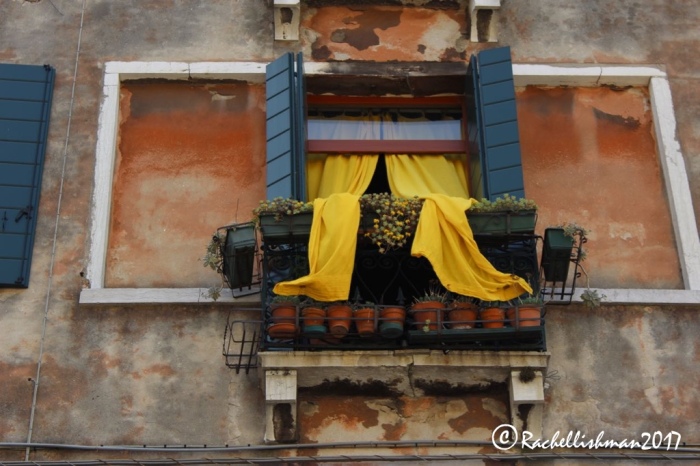 How did I spend my time in Venice?

Day one: I spent the morning getting wonderfully lost, then found the Rialto and fish market, which quickly became my favourite area. I enjoyed a late lunch with great Pinot Grigio at La Merca. I caught my first Italian sunset on the main boulevard outside the Doge’s Palace, then went inside to explore.

Day two: I walked through the old Jewish quarter, embracing my inner-tourist by sitting down with a cappuccino. I hit St Marc’s Square to look inside the Basilica, afterwards wondering towards the navy barracks to escape the gathering crowds. After an Aperol spritz, I had dinner and a walk around the ‘new’ city that’s still home to a medieval clock tower and a lovely, quiet piazza. 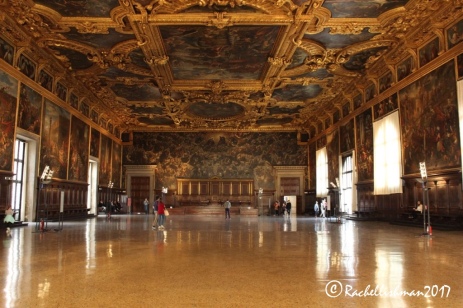 Inside the Doge’s Palace 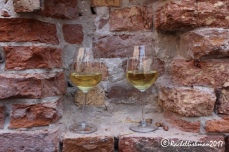 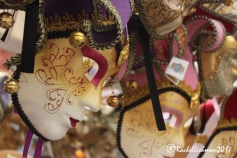 Souvenirs at the Rialto market stalls 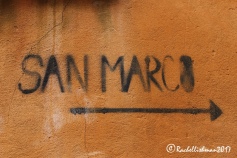 All streets lead to St Marcs…

Quieter canals near the naval area

Selfies from the Rialto Bridge

One thought on “Always Looking Up: Two Days In Venice”