The postcard A-lister, St John’s church stands over the small cove at Kaneo. It’s the final focal point on a peninsula that suddenly gives way to the blue waters of Lake Ohrid beyond, and has been for over eight hundred years.

The Church is just one of many ancient developments littering the small city of Ohrid. Most have stood the test of a millennium of wars, civilisations and a changing natural environment. In recent times, their survival has been helped by the advent of UNESCO that work to protect sites of both natural and cultural importance.

Of course, protection sometimes creates limits for the inquisitive visitor. On a walk among Ohrid’s walls, I found the perfect balance between preservation and a transparency that made it easy to get up close and personal with the ancient city’s stories.

After a morning swimming in the church’s shadow, I took the steps cut into the rock to see inside.

Experts believe that an unknown architect built St John’s during the 13th century, shortly before the area was taken over by the Ottoman Empire. Despite its precarious position on the cliff face, it still makes an impression on its surrounds. Its interior tells a story of its community connections through the ages, with structures altered by resident Ottomans and frescoes from different eras depicting both St Clement of Ohrid and St Erasmus.

Only ten minutes walk from the iconic St John’s, I was stunned to find a huge network of ruins. It includes St Clement’s Monastery (which was at one point turned into a mosque) a baptistery and a Christian Basilica. Teams of archaeologists still excavate artefacts directly alongside groups of tourists.

Historical fact and conjecture seem to blend poetically within the complex. Baptisms were apparently being performed here from as early as the 4th century AD. Perhaps an even bigger claim is that the first university in Europe was founded here to teach monks and preach Christianity. 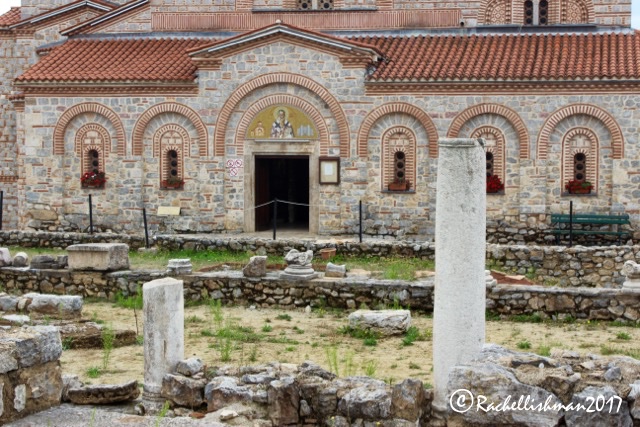 St Clement’s Monastery is part of the larger Plaosnik complex

From peninsular tip to peak was no further than a kilometre, although I reached Samuel’s Fortress weary in the afternoon heat. Luckily, a breeze was blowing through the ramparts of the city’s old garrison.

The original fort stood well over a thousand years ago, but the impressive stone steps that visitors climb today was built under Tsar Samuel in the 11th century. It was used to protect Ohrid in times when its position at the end of the Silk Road and the edge of the Ottoman Empire, made it a valuable prize for conflicting peoples. In 2017, it’s a peaceful place and gives the best view of Ohrid and its surrounding countryside.

A very welcome downhill stroll from the fortress led me to Ohrid’s ancient theatre. The only one in Macedonia that’s not in fact Roman, but Hellenistic. There’s something silencing about a theatre built in 200 BC that still provides a seat to watch plays and operas. Its position, cupped between two slopes, allows for fantastic acoustics.

It wasn’t always plain sailing for the theatre: In the wake of Romans executing Christians within its concave structure, the stonework was actually buried by locals after the Roman Empire fell. Fatefully, this probably led to the remains being better preserved, only to be uncovered as recently as the 1980s.

Thirsty for a beer in the harbour below me, I continued along the cobbles to my final stop. I’d left the best for last.

St Sophia’s church looks similar to others in the city, with a red tiled roof and colourful stonework right up to its eaves. The main building dates back to the 11th century: not unusual within Ohrid’s UNESCO listed walls.

However it remains one of the most historically important sites in Macedonia. Inside it boasts the largest, best preserved collection of Byzantine frescoes of anywhere in the world. Sophia’s famous frescoes are extremely accessible. Entrance is cheap, photos are allowed and I could get close to examine this astonishing piece of history.

Ohrid’s treasures put forward a strong argument for the crucial work that UNESCO does. They also remind us that public accessibility to them is essential for us to learn about our present from the stories of the past that always surround us.

8 thoughts on “A Walk Through Five Historical Treasures In Ohrid, Macedonia”