With a characteristic scratch of his sun hat, Dimitri took a seat at the front of the boat and we chugged away from the fishing town of Peshtani. Lake Ohrid stretched out ahead: A beautiful hazy mess of still water and white sky that made the mountains of neighbouring Albania almost invisible on the horizon.

Dimitri was the frontman of Dutch company Lale Tours and quite the comedian. His rhetoric of local facts was, judging by the shaking shoulders of my fellow passengers, often broken by jokes. However a crucial breakdown in communication (which I’ve come to realise leads to my best travel experiences) had found me literally adrift with thirty Dutch people and no English-speaking guide in sight!

Oddly, after a short time I was able to gather basic information about the lake from Dimitri’s stand-up act: It was around 200 meters deep at its centre and had been inhabited since ancient times by various peoples; most recently, rich property owners who were in constant quarrels about planning permission with the authorities. My translation was unromantic but I was already impressed.

My fascination steadily increased over a tipple of home-brewed breakfast Rakia, lovingly poured from old olive oil bottles. Meanwhile, the penny had finally dropped for Dimitri. Slightly distressed by my lack of laughter at his well-rehearsed gags, he harangued another passenger into translating to me for the rest of the day.

With its postcard perfect frame of white cliffs, distant forested slopes and abundant wildlife, you don’t need a reason to sail on Ohrid. However I had two destinations. My first was known as the St Tropez of Macedonia: Trpejca. It was a little harder to pronounce than its French counterpart, but the tiny fishing town was easily a highlight of my week in the country. Despite locals comparing it with the French Riviera’s most flashy destination, Trpejca seemed to have completely avoided mass tourism.

After marvelling at old cars in the town square that were purposefully left unlocked by locals, we meandered upwards past gardens and balconies brimming with fresh fruit and vegetables. Beaming homeowners leaned over their gates to hand out freshly picked grapes for which a smile of gratitude was payment enough. Apart from the exquisite cappuccino I sipped at the only waterfront restaurant, time had stood still in Trpejca.

St Naum’s Monastery: The destination but not the journey 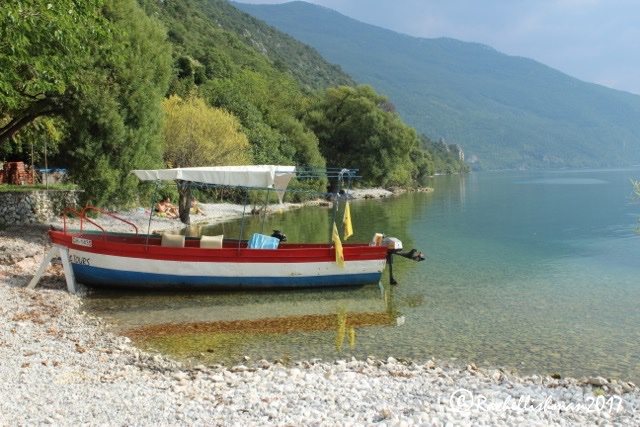 A tranquil spot for a barbecue lunch

Lake Ohrid’s ancient shores – more than a reason for a boat trip!

Dimitri’s clock though, was working a little faster. Advertised as the day trip’s focal point, we soon moored at St Naum’s Monastery. The building itself was underwhelming compared to the stories it supposedly held but there was no doubt that tourism had definitely arrived. Cookie-cutter stalls and expensive wooden decked restaurants were buzzing with visitors and local army personnel making the most of the mild weather. Despite the bustle, I still found a moment for quiet, if not exactly religious, contemplation amid river waters that fed the Lake.

By the time we began a leisurely cruise to retrace our route to Peshtani, everyone was hungry for the promised barbeque lunch. Luckily our final port of call was a trestle table laden with local produce, whipped into traditional dishes by a few local guys who seemed to materialise from thin air. Unsurprisingly, everyone’s English improved over a few bottles of fruity red wine and I made many friends over discussions on the future unity of Europe. All the while, Ohrid’s colours changed constantly behind us as the daylight turned into a rosy glow.

Back on the ancient waters for a final time, the weakening sun finally lifted the veil on Albania’s mountaintops. In the stillness of sunset over one of the world’s oldest lakes, it was easy to imagine a time when its famous endemic species were only just beginning to evolve. For those few moments before I begun an impromptu session of roadside Rakia drinking with my new companions, I travelled back in time.

Dimitri was also unusually sedate. Maybe even he realised that no joke was needed to make this moment special.

4 thoughts on “From Religion To Roadside Rakia: Macedonia’s Lake Ohrid”