One of my favourite films as a child was Mary Poppins. I remember enjoying the songs, costumes and Dick Van Dyke’s cockney accent. Most of all, I recall wishing that world existed; where I could jump into chalk drawings, rise up into the eaves with laughter and hop across the rooftops of London with gay abandon. Secretly, I still do.

For June’s Monthly Mission, for a fee of £26, I finally got to do at least one of those things. Well, almost. I scaled the top of a well-known rooftop at the O2 Arena. I’ll admit that it wasn’t completely true to the film. It was near impossible to skip and clack my heels under the weight of the safety harness and I wasn’t allowed to carry any accessories (let alone a large umbrella) Still, I came as close as I ever will, to appreciating London’s skyline from Poppins’ perspective.

Slightly quirky and disconcerting safety video aside, the build-up was exciting. I looked myself over in my bindings and wished I’d worn longer shorts. My summer ensemble had bunched rather unfortunately around the crotch of the harness, proofing both unglamorous and uncomfortable. Despite resembling a man below the waist, I had a big smile on my face and couldn’t wait to get going. Monochrome photos of other famous explorers were glazed onto the walls with a short ode to each. Would I become the next Edmund Hilary or Ellen McArthur? There was only one way to find out.

Further guidance on how to attach my high-tech clips onto the twisted steel cord that would guide me over the top of the Dome, confused me. I realised, while fumbling to follow these simple instructions, that it would be a while before I was at Ellen’s level of expertise. Nevertheless, fully attached, and with a warm June breeze pulling wisps of hair away from my face, I felt intrepid and keen to start.

I’m an avid hiker, but the walking was steeper than I expected. My calves pulled slightly as I tried to walk steadily on the taught rubber walkway beneath. I was concentrating so hard that I had to remind myself to stop and look behind me. The evening was a spectacular one, with a wash of pinky-purple sky settling over the low-rise buildings. I turned and continued striding into the sunset, which I couldn’t quite see over the top of the giant curve of tarpaulin, but knew was happening quickly now.

I wasn’t disappointed as I reached the highest point of the walk: A vivid sky silhouetted Canary Wharf’s skyscrapers and spindly angled construction cranes. The river reflected the steely green of the buildings on its banks, and meandered around us in a perfect horseshoe. Planes took off into the twilight, sending a distant roar into the tepid air around me. It was an urban rooftop paradise, just like the film.

Once on the viewing platform, health and safety madness was relaxed slightly, and I was able to snap a few photos and read the circular plaque. My favourite historical character, Henry VIII made an appearance, as well as several other famous buildings and a plethora of facts and figures. Did you know that the O2 was built with a diameter of 365 meters to represent days in a year? Were you aware that it measures 52 meters at its highest point?

The Google-able information didn’t concern me; I just wanted to take it all in. Standing on a famous landmark staring at a world-renowned skyline, I watched the final moments of the day fade into dusk and a full moon rise above the horizon.

The only thing missing? A low-lying cloud to carry me to the next building…

A panoramic shot of Canary Wharf, the Thames and London’s docklands

Up at the O2 occupies a little office alongside the main entrance of the famous stadium and tickets can be bought there or online. Prices vary dependent on when you want to go, but I had opted for a cheaper weekday evening, that coincided with a summertime sunset. What else? Well, if you don’t like crowds then opt for a day when there’s no concert on as I did. That being said, I can imagine that the experience may even be heightened by standing on the colossal reverberating roof! The climb itself takes around 90 minutes, and in that time you get 360-degree views of London and the Thames. The closest parts of town are Canary Wharf and London Docklands. Overall, it’s a cheap and easy activity that can be fitted in around the monotony of a 9-5-city existence! 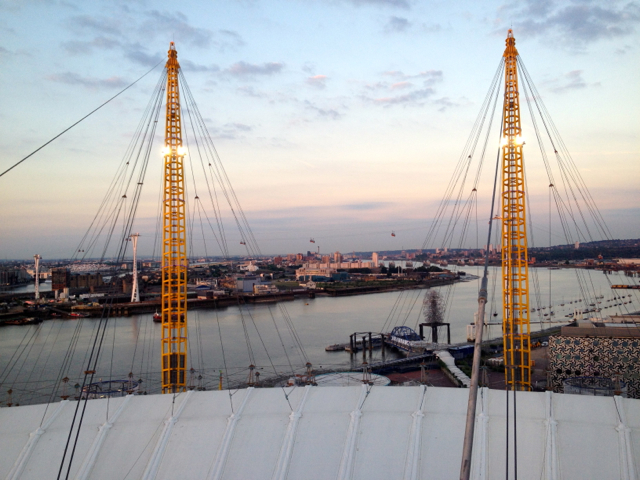 Choose a sunset tour time for something a little more special. In mid June, the sun goes down at about 8.45pm. 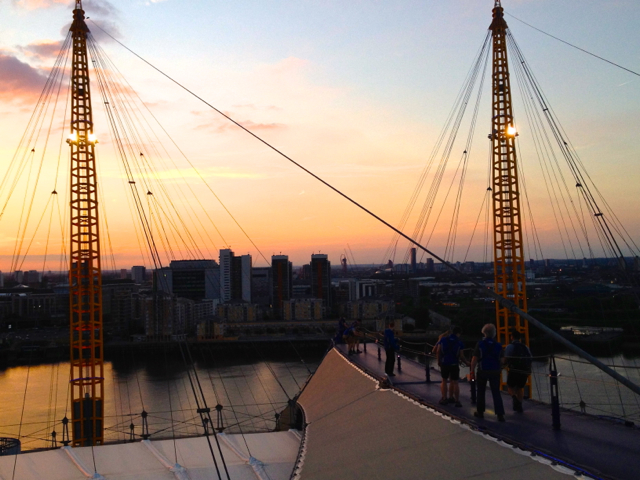 Walkers prepare for the downward walk to the other side – this bit would be a little scary if you’re not good with heights!